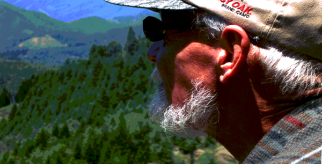 The Passing of Michael Eagle
by Daphne Singingtree

Michael Eagle was my closest and truest friend. I knew him for 35 years, he was the constant man in my life, other people came and went, but Michael was always there. We were never lovers, but had an intimacy unlike any other relationship. We were so close people often thought we were a couple; we loved each other deeply and sometimes bickered and argued like an old married couple.  He was the Eagle in Eagletree, the name of my business. He was a father figure for all of my children, and was always there when I needed him. He was 69 years old and lived an extraordinary life. He was in the service just prior to Vietnam, flying small planes in Alaska doing mapping and aerial photography. He was an experimental machinist for Boeing and helped design the landing gear for the 747 that still fly today. He worked on oil rigs, as a long haul trucker, short order cook, big equipment operator, a sign painter, an artisan, gold dredger, big equipment operator, mechanic, mason, woodworker, and jeweler. A contractor and handyman who could build a house from the ground up, he could fix anything. Once he mastered something he moved on to the next thing.  He was an accomplished herbalist, woodsman, and hunter. He loved electronics and was a Ham radio operator. For much of the last 20 years he was a gypsy and lived in his motor home, often parked at my house, or would take off to the south in the winter, or the mountains.  He had his RV rigged o be completely off grid with solar power. He made a wood fired sauna on wheels, and a solar hot tub on wheels. He loved learning how to do new things and I was always surprised to learn something he knew how to do, from stained glass, to how to develop film. One day he decided to make chain mail and started on a pair of gloves, got the first one done, then in the middle of the second one changed his mind and turned it into a necklace and gave it to me.  I could write pages about all the things he did and how extraordinary he was. He taught my sons carpentry, and my daughters how to drive. He is one reason why they turned out to be such amazing people. He was so proud that my daughter Trillium was becoming an electrician and a welder, that my other daughter, Aradia has a successful business, and that my sons, Alder and Terran have great jobs they love. When I had my car accident he was by my side and came every day to see me in the nursing home.  He was considerate to the extreme, and never wanted to eat a meal without contributing something. He was a very hard worker, and could work much younger people under the table. I remember when he met his sweetheart, Katrina, and how much in love they were. I was so thrilled for him, as he was alone most of the time I knew him. It was wonderful for two people late in life to have met and be so perfect for each other.  He had son from his first marriage,  Ed, with whom he had lost contact for thirty years. They reconnected about ten years ago and even from a distance became very close,talking on the phone and via Skype for hours at a time about politics,  prepping, airplanes, radios, and electronics for hours. His other son Gabriel was out of town and we could not reach in time, many years Gabriel’s sister Dru had come live with Michael and he was closer to her than her biological father, he became dad too, and grandpa to her child.

He was exceptionally healthy and active and working up to the day he died. He did not believe in western medicine and only after much harassing on my part did he finally start taking medication for high blood pressure, and his reluctance to have medical intervention was a choice that he knew might cost him his life.

He was living way out in the mountains in Southern Oregon, off the grid, and working on big equipment on a ranch, when he collapsed on Monday morning. He was air-evacuated to Medford, where they found that he had e had a massive stroke on both sides of the brain. The damage was severe and there was no chance of any kind of recovery.  There was a delay in reaching family so the hospital placed him on a ventilator. This gave time for Ed to fly in from Missouri and Katrina and I to arrive. The family placed him on a do not resuscitate order, as we all knew that is what he would have wanted, but we kept him on the vent until his son Ed could fly in.  The nurses and hospital staff were amazing and wonderful. I tapped into my midwifery skills to make plans and create space for a peaceful transition. I know now why so many midwives turn to caring for the dying, there are so many similarities. It felt like a birth, in uncertainty, in fear, to having nature be in control, in wanting to do the best thing, but instead of anticipation and joy, sorrow and loss.  Katrina, Dru  and I stayed with him at the hospital until Ed arrived. We removed the ventilator and he breathed on his own fairly steadily through the night,  and in the morning, Katrina climbed in bed with him, we all held him and sang and prayed, and he slowly and peacefully passed. We washed his body, sewing him into a blanket as a shroud with sage in the traditional Native manner.  The bath and the shrouding was such an extraordinary process, and so loving to do with Katrina, we joked and cried, and took our time. Katrina trimmed his beard, like she has been doing for nine years. Dru had missed the moment of passing but came in the middle of the bath, so we covered Michael up and the hospital staff let Dru’s daughter who is five into the room for a few minutes to say goodbye to grandpa. Then we finished the bath and the sewing of the shroud, and with final kisses, and sent him off for cremation.

One of the nurses told me that they had never had a family wish to do the post mortem care, and it was an honor to be with us during that time.  The hospital had two women as part of their compassion team, who were with us whenever we needed them, and their presence was very helpful. They said that it was one of the most peaceful passings they had ever assisted in.

The process of having that time with him at the end, the way space was given to us, the love and care from the nurses and staff was extraordinary. I think of them as passage doulas. Michael’s passing was inspiring, beautiful, and profound, and the single most difficult thing I have had to do in my life. He is the closest person to me that has ever died, and I am having a hard time imagining my life without him. But what helps my grief is knowing he died on his terms, on his mountain, did not linger or suffer, was not a burden to anyone and his passage was so filled with love.

We should all end this time in life the same way we come in, surrounded by those who love us, peaceful, conscious and filled with the spirit of the Creator.